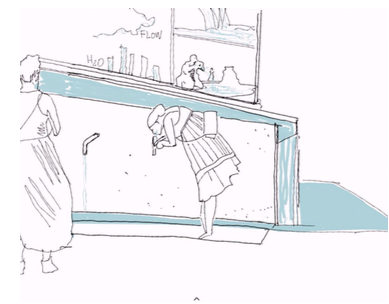 This proposed Installation by invitation for the Biennale di Architettura di Venezia addresses the role of water in public space and in the global ecosystem.

Water is the life blood of the city. In its absence we must go out and find it and, through human labor or engineering prowess, bring it to our cities. But once it has served our needs, it continues on its circuit to rivers and seas.
Global migration increasingly tracks water — people flock toward clean water or run from rising sea levels and climate catastrophes.
Where water and people come together, the well or the fountain, this is the place of exchange. Stopping to drink means finding peace (the lion and its prey both drink from the same source).
Water provides the common denominator of human decency. The poorest and the richest both need water. Laborers and land-owners, tourists, immigrants, politicians, priests, and prostitutes all drink from the same fountains.
In a historic moment in which societies are fortifying their boundaries to ebb the flow of people, water passes regardless. (As architects we know how hard it is to stop its natural circulation.)